A new assessment of the climate impact of the proposed Energy East pipeline is significantly lower than the previous assessment, mainly because it assumes the oil would be extracted and shipped by rail if the pipeline is not built. 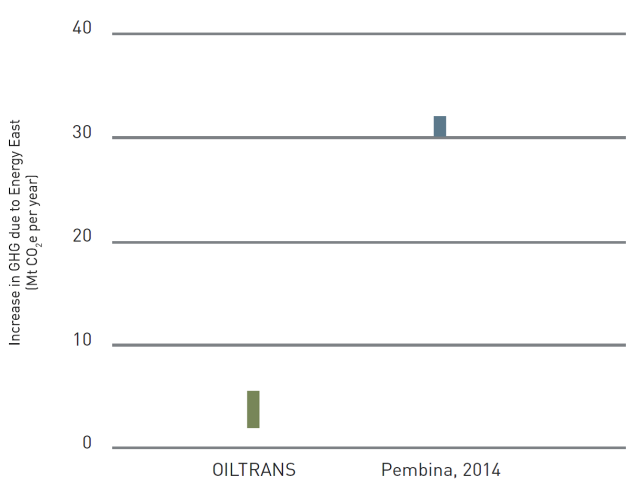 How could these two assessments of the same project come up with such different results? To answer that question, we need to delve into the somewhat arcane world of GHG accounting.

The climate impact of a project depends on a number of things, including what it is compared to. In GHG accounting jargon, this is called the “baseline”, or what would happen without the project. But because no one knows for sure what would occur in the future if a project doesn’t go ahead, there is no foolproof way to select the best baseline to compare a project to. But that doesn’t mean any baseline will do. Thankfully, the international GHG accounting community has spent a lot of effort developing rigorous and defensible methods for selecting a credible baseline.[4] As far as I can tell, neither Pembina nor Navius used these methods. I say “as far as I can tell”, because neither Pembina nor Navius documented, in a sufficiently transparent way, how they selected their baselines.[5]

How should the baseline be selected? According to internationally accepted best practices, the following steps should be included:[6]

Did either study include these steps? It’s hard to assess the OEB/Navius study, since we only have a 4 page summary of their analysis, and it’s not clear when the full report will be available. From the 4 page summary, it appears that the Navius study spent most of their effort on step 3, but may have glossed over steps 1 and 2. The Pembina study considered the “oil by rail” baseline, and decided it was not feasible due to a number of barriers (e.g., cost, capacity, social license). For both studies, a more systematic and transparent application of best practices for baseline selection would enhance their credibility.

An accurate estimate of the climate impact of the proposed Energy East pipeline is essential to inform the public and decision makers. This requires a transparent and credible methodology, and we should expect it to be consistent with internationally accepted GHG accounting standards and protocols (i.e., codified best practices). This must include, amongst other things, a full documentation and justification of assumptions about what would happen if the pipeline is not built (i.e., selection of the baseline). Until this happens, any estimate of the climate impact of Energy East is incomplete and unreliable.

Duncan Noble has developed and/or reviewed dozens of GHG inventories/carbon footprints for organizations, products and projects for clients in various sectors. He has contributed to the development of leading GHG methodologies including the ISO 14064 Standards and the WRI/WBCSD GHG Protocol (Corporate Standard). He actively participated in the “Methodology” Technical Work Group of the GHG Protocol Product Life Cycle Standard and supported a client Road Test of this Protocol. He was actively involved in the development of the GHG Protocol Corporate Value Chain (Scope 3) Standard. Duncan has also developed a methodology for the Verified Carbon Standard, the world’s leading voluntary greenhouse gas program. On behalf of CSA, he has delivered eleven 2-day training sessions on the ISO 14064 Standard and WRI/WBCSD GHG Protocol.

[5] At time of writing, only the 4 page “Preliminary Assessment – Climate Change” was available from OEB/Navius.

[6] See, for example, the UN CDM “Combined tool to identify the baseline scenario and demonstrate additionality”, available at http://cdm.unfccc.int/Reference/tools/index.html

[7] The “most attractive option” depends on the perspective taken for the analysis (e.g., a private investor such as TransCanada would have different “most attractive” criteria than a public policy entity).

Duncan Noble explores #sustainability #climate & #carbon. Those who have the privilege to know have the duty to act. Tell the Truth and Live the Truth.
View all posts by Duncan Noble →
This entry was posted in Business, Carbon Management, Climate Change and tagged Canada, climate change, GHG emissions. Bookmark the permalink.